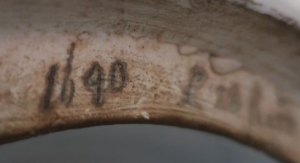 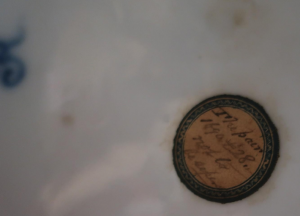 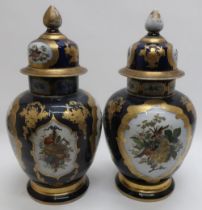 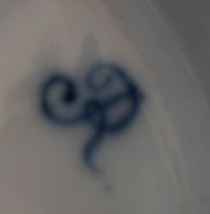 Or rather they are not!!. The description reads; ” Large pair of early 20th C Meissen vases and covers, the ovoid bodies painted with panels of exotic birds, fruit and foliage in gilt reserve panels, the domed covers with onion finials, blue Augustus Rex mark and label ‘Meissen 1690 £28 not to be separated’ to base H5cm (extensively restored).

The only authentic part of this pair of vases is possibly the label under the base that reads; “Meissen 1690 £28”.

The first mistake in the description are the vases being described as Meissen. Looking at the label is the number 1690. Meissen didn’t begin to experiment making porcelain until 1707 and the AR(Augustus Rex) mark to the base if was authentic would have been painted on porcelain mostly during the 1720’s. However the  blue Augustus Rex marks painted on this pair are later 19th century as opposed to  the description of early 20th century.

What mistakes has the cataloguer made with the lot’s description? The size; 5cm high and with a starting price of £300 would be a lot of money for extensively restored vases and covers of that height and of the suggested date of early 20th century. Had they been authentic vases and covers even of such a small size I would certainly want to own them as they would be of museum rarity.

Sadly this is not the case. It is also very doubtful such small vases and covers exist of this design that date from when the authentic AR mark was used on Meissen porcelain mostly during the 1720’s.

You can begin to imagine what and authentic pair of heavily restored vases that are 50cm high could be worth. Quite possibly well into five figures.

In the case of this pair the painted AR mark is also incorrectly painted and therefore could not possibly be authentic.

At the end of the day this is The Meissen Man’s opinion!

This website uses cookies to improve your experience while you navigate through the website. Out of these, the cookies that are categorized as necessary are stored on your browser as they are essential for the working of basic functionalities of the website. We also use third-party cookies that help us analyze and understand how you use this website. These cookies will be stored in your browser only with your consent. You also have the option to opt-out of these cookies. But opting out of some of these cookies may affect your browsing experience.
Necessary Always Enabled

Any cookies that may not be particularly necessary for the website to function and is used specifically to collect user personal data via analytics, ads, other embedded contents are termed as non-necessary cookies. It is mandatory to procure user consent prior to running these cookies on your website.