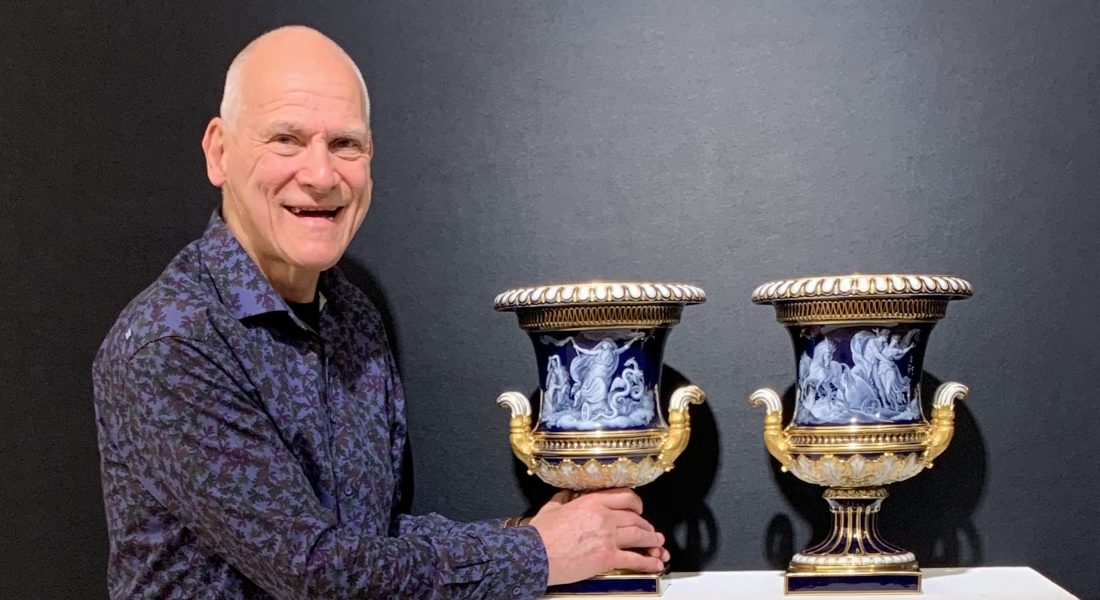 Bonhams sale celebrating 500 years of European Ceramic Production was a sale to be proud of. What differentiated this sale  was a large collection of 19th  and 20th century Meissen Porcelain with more specific lots when compared to previous sales over the years.

Back during the 1990’s it was the Japanese who supported the market for 19th century Meissen with a minority also interested in the 18th century. Since the stock market crash in Japan 19th century Meissen suffered and the price fell dramatically. However this was not in my opinion just due to the financial climate but also lack of understanding of quality versus price. Only a minority of Meissen collectors and specialist dealer pay attention.

When I wrote the Meissen Collectors Catalogue back in 1999 the hope was that more buyers would pay attention to quality. While in all 1,500 copies were sold worldwide few copies are available online. Nevertheless from time to time I see mentioned reference to my Catalogue.

What was very noticeable in this sale was a lack of high prices; only the more exceptional lots fetched good to very high prices such as the last lot 282 pair of Meissen “Limoge Enamel” Krater Vases that made an expected price of £69,000 including buyers premium.  Discussing pair of vases with Nette Megens Bonahsm  specialist in European Ceramics.

If I had to take a candid guess as to the buyer I would say either the Chinese or Taiwanese. The reason being they are being seen as paying very high prices for lots they are interested in. It would appear this new reign of customers are mostly interested in the more exceptional and decorative items. This means there is a growing customer base of interested collectors in the far East from  China to Japan. While many of the lots sold there were a number of casualties as well as those lots that sold for very little. Were they a bargain? You will have to wait for my next blog to find out why in my opinion they failed to sell or sold for a low bid.

Meanwhile I would like to discuss the following lots. Some of which fetched a high price by today’s standards but not necessarily compared to the 1980’s and 1990’s when similar pieces pound for pound would have made more money. Can you guess who might be amongst the likely buyers. I will put you out of your misery; The Meissen Man. Only some of my customers who I sold to could outbid but these were few and far in between.

These days there is the Internet that is pushing up the prices. Back then there was just a handful of experienced specialists who would compete with the rest of the world who either had a catalogue or turned up in person to view.

I am not certain whether I had this particular model although possibly something similar. The centrepiece stood 77cm high.

The following pair of groups are outstanding. Not only in their quality but also that they a pair. Pairs of 19th century of such large size are rarely seen together. I think in my lifetime I may have had a few of these pairs but also have had them individually. Always I gave in the region of £12-18,000 for a single group pending the condition. That was back in the 1980’s and 1990’s. Allowing for inflation even the price paid at Bonhams of £44,000 is a bargain in comparison. The only notable fault with Neptune is his missing trident. 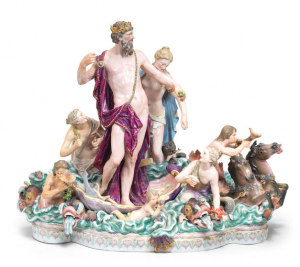 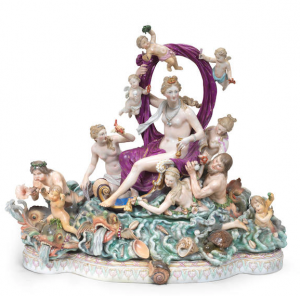 Lot 257 seen below sold for a tad below £10,000. It was also a better buy in my opinion than the following similar lot that sold for just over half the price. Compare both groups; which do you think is the better quality and best value for money? Watch out for my future posts that explain what I believe. 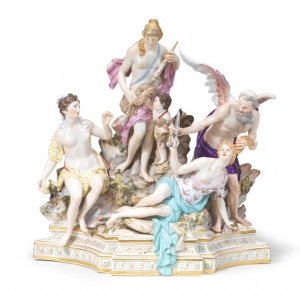 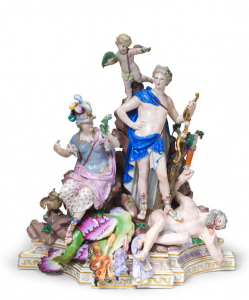 Lot 274 A pair of Large figures of a Lady and Gentleman sold for £6,375 including buyers premium. This pair has to be one of the bargains of the sale. I often gave as much as this pair cost for a pair of this models in as good condition as they can be(there’s always some restoration on such large items). Find an absolute perfect pair would be very rare indeed. The pair stand at approximately 50 cm high. Watch out for future posts discussing why models as large as this pair are often found with damage and learn about something unique and special about this and similar pairs. 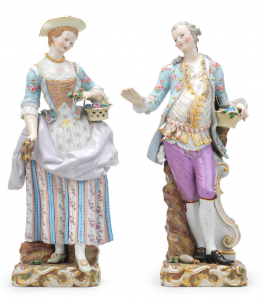 The purchaser of the following pair of Parrots has good taste. His bid of a little over £8,000 secured the bid. Even with the damage while the price might seem excessive anything much less would be a bargain. Meissen modelled literally 1oo’s of pairs of parrots. However few of these can match the quality or the condition. Even this pair is likely to have had some damage or restoration. They are simply stunning and amongst the finest quality I have seen recently. They were modelled by the outstanding manager of the modelling department Ernst August Leuteritz around 1880 and stand 31 cm high. 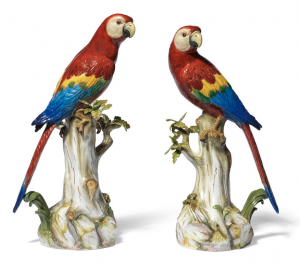