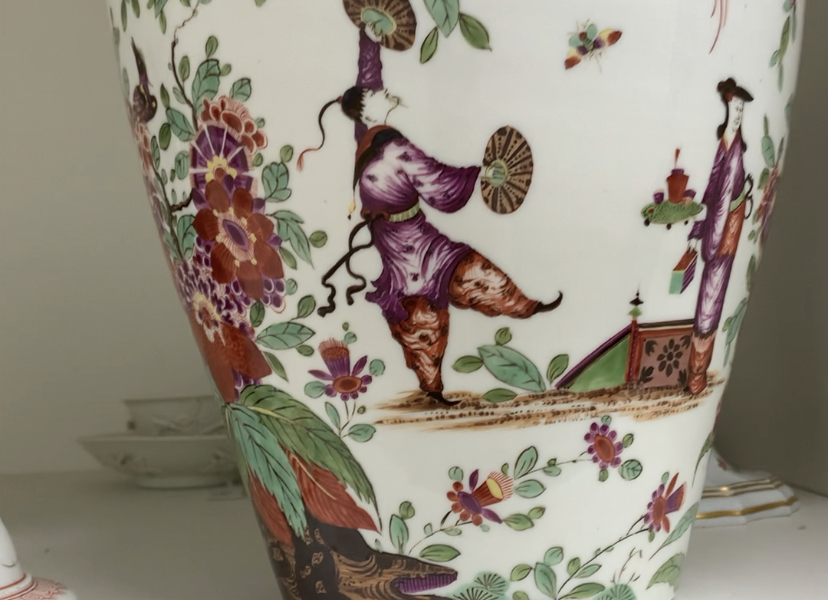 The following videos are a preview of the Bonhams Sale; “500 years of European Ceramics”, to be held on July 5 2021

Viewing the European Ceramics on the shelves in the warehouse in Bonhams is like the never ending story. This sale is amongst the largest of its type ever held with a vast quantity of three centuries of Meissen.

It is the era of Leuteritz where quality excelled over all other periods in Meissen’s production as can be seen looking closely at a pair of vases and covers seen in the video below. Particularly striking is the volume of individual leaves and flowers that was applied to each of the vases;. Such a pair would have probably taken a year to be produced.

This video begins with lot 38 a rare set of 21 Cries of Paris with an estimate of £60-80,000. As seen in this video each of the figures are of wonderful quality with condition varying from one figure to another. these figures are a perfect example of the quality achieved circa 1755. Compare with the 20th century set in the video below.

The video continues with a rare part service by Horoldt and lot 10 an important and rare silver gilt mounted teapot and cover that illustrates both a crossed swords mark and KPM in underglaze blue circa 1725.

A spectacular pair of Meissen Parrots painted by Leuteritz at the height of his career in 1880. This pair precedes a view of other 19th and early 20th century lots including a 20th century Monkey Band ending with a view of lot 56 “Pair of Augustus Rex Vases circa 1730-35

Cries are amongst the most popular and sought after of all of the Meissen series ever made. Even though this set are made in the middle of the 20th century it is quite exceptional to see as a set.

Cries are tradesman and women.

Lot43: During the seven years war in 1763 were difficult years of production. Nevertheless there were a number of fine services that were produced at the manufactory including this wonderful tea set circa 1755-60. Although the painting is not the best the brightness of the enamels advertises a quality look to the set.

The beginning of the video sees the shelves in the porcelain warehouse at Bonhams. Next the camera moves on to a stunning candle centrepiece lot no 247 circa 1860; illustrating a very unusual candlestick that is also a table centrepiece. What is interesting about this lot is that the group is made up of five separate pieces  of fauns that make up the figural part of the group and a separate piece that holds the candlestick in place.

Standing 77cm tall it is a spectacular piece and one model The Meissen Man has never owned.

The following lot is an important Meissen Augustus Rex Jar and cover circa 1725. The Augustus Rex Mark is particularly spectacular since it is so well painted. What makes this Jar even more special is that it is painted by two painters. One is the most important painter of the early 18th century Horoldt and the other is the outside decorator Stadler. Both of these artists each painted a cartouche on front and reverse of jars. This makes an easy comparison to see the differences in the style of the painting of these two artists.