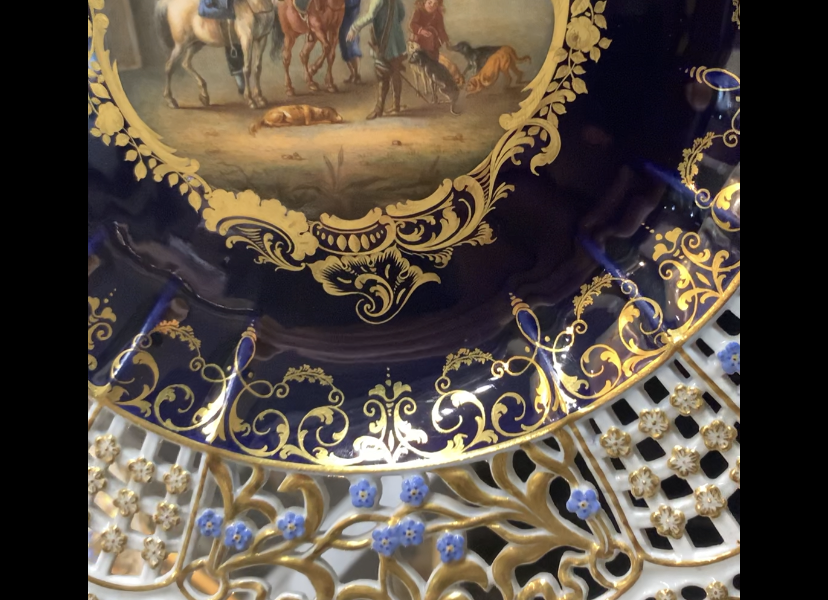 To understand a little about Meissen fraud it is necessary to understand the different types of fraud. These can be any of the following. The crossed swords mark is tampered with, the crossed swords mark is erased, a piece of genuine Meissen porcelain is painted outside of the factory and is not described correctly. It is being sold as a genuine piece of Meissen Porcelain that was painted at the factory.

Another types of fraud is when a piece becomes damaged and it is restored by a person who has spurious intentions. This could be a group that has become badly damaged and is missing a part of the piece; for example a figure is missing. Since the cost of restoration outweighs the value of the piece it is passed off as original, genuine and being described as being complete.

Other types of fraud are a figure or group being described as being complete. Yet in fact is part of  a much larger sectional piece of Meissen.

However fraud first appeared on the Meissen scene during the  first 20 years of the invention of Meissen Porcelain.

The Art of Deception

It is a well known fact ever since decorative arts were first invented thousands of years ago profiting out of deception was a successful business. Especially items of Royal Assent that had the highest value were items most likely to be copied. More recently during the Ming and Ching eras millions of copies were manufactured to fool the buyer in believing they were buying an original work of art.  Often the final buyer will be fooled in believing they are buying a genuine and original article based on paying an extraordinary amount of money; perhaps believing the seller, unaware they themselves do not have the knowledge to recognise fake from authentic. Today the whole genre of the  art of deception has had hundreds of years of rehearsal.

Since in todays world with the disappearing antique shops and the vast market created my thousands of auction salesrooms now dominating the market Caveat Empror (buyer beware) you are really buying with a risk unless you trust the seller’s authenticity.

Primarily the focus for fraud was on two periods of Meissen’s history. The Kings Period of the 1750’s (cross swords with a dot between the swords pommels) and the period under Count Marcolini (1788-1812) a star is seen between the pommels these pieces are copied the most.

Meissen porcelain was first invented in 1708 years and became the premier manufacturer in Europe porcelain for more than  300 year. Fraudsters have devoted their life purposely trying to recreate  knock-offs of  the Meissen trade mark. They did this in the hope they could increase their own  sales. On the whole the cross swords mark seen on competitors is inferior to the techniques used at Meissen.

It is debatable how many people around the world have what they believe to be a genuine piece of Meissen but in fact is either  `forgeries, counterfeits, copies, fakes, reproductions, replicas, and imitations.

When looking at something represented as Meissen you need to forget about the asking price and the venue.  Fakes are sold at auctions for thousands of pounds and fakes are sold at flea markets for pennies, and vice versa.  Some other antiques have neat little tricks you can use to easily tell if something is authentic or a reproduction.  Sadly, there isn’t one make or break detail to check for when it comes to recognising Meissen Copies. That is other than the experience of handling genuine Meissen over a number of years.

However I encourage you to look at the following list that may help you identify the differences between fake and original.

Porcelain objects need to have a small hole in them to allow for heat to escape during firing. Meissen usually put the hole on the bottom of the piece; if that was not possible then the hole was cleverly disguised.  People making reproductions were not always careful to hide vent holes.  If you see a Meissen piece with an obvious vent hole, then it is probably a reproduction.

Forgers focus on copying authentic pieces.  The easiest way to do this is to obtain an authentic Meissen figure and use it for the fake mould.  The problem with this technique is that the fake ends up being about 16% smaller than the authentic example.  Knowing that won’t help you much out in the field.  However, given a chance to adequately research a piece, it is great information to have in your back pocket.

This is another test that is very important.  In theory all authentic Meissen porcelain figures (of the same design) should weigh the same because they were made using the same mould.  If you can get the weight of an authentic example, then you can compare that to a potentially spurious example.

Meissen copies and fakes tend to be whiter or cream colour.

This is one of those classic antique tricks.  Virtually all Meissen porcelain figures depicting people from the 1700s have brown eyes.  Anything that has blue eyes should be viewed with extreme skepticism.

The silver lining to this rule is that if the figure has blue eyes, and is authentic, then it will be a very rare example and valuable.

This is more of a factual lesson to remember than a great way to spot a fake.  Figures from the 18th century have very lightly painted skin and their hair is drawn as single black lines over a creamier colour.  During the 19th century modellers used a lot more skin colour and hair lines are less pronounced.

One of the most intuitive things to look for when trying to determine the authenticity of any antique is the details.  Does it look hand painted?  Does it look like it was made to the standards of the most important porcelain manufacturer in history?  Always start looking at Meissen porcelain critically.  An old art adage is that if there is any doubt to authenticity, then without a doubt it is not authentic.  If you have to convince yourself to look past obvious red flags then you are trying too hard.

It is important to be able to recognise genuine authentic Meissen porcelain versus Meissen, copies and fakes. There is a difference.

Meissen was the first manufacturer of true hard paste porcelain that copied original Oriental porcelain; chiefly Chinese and Japanese ceramics.  As mentioned above when the management created the cross swords trademark in 1722 it was to prevent other manufactories from copying. However, some porcelain makers branded their goods with look a like marks that differed from Meissen’s cross swords mark and herein is where the problem lies. Buyers of all these different porcelain manufacturers had difficulty in distinguishing Meissen from the smaller manufactories. Everyday in many auction salesrooms and at dealers doing antique fairs it is inevitable there will be some who do not have the knowledge selling copies of Meissen.

This problem was not to go away. On the contrary it helped the competing porcelain makers survive through this lack of knowledge. However Meissen Porcelain stands out amongst the crowd of porcelain makers as far as quality is concerned.

Unless you the collector have an understanding of this quality and can recognise the Meissen cross swords mark over its competitors you are unlikely to know the difference.

The emphasis of the Meissen Collectors Catalogue published by the Antiques Collectors Club in 1999 was to illustrate what were the most fashionable of Meissen during the first decade of the 20th century.

It is not easily possible to learn to recognise authentic Meissen from reading books and recognising marks. This means it wont necessarily protect you from buying a copy or fake. However by all means ask The Meissen Man at [email protected] his advice.

The following is just one example of fake Meissen Marks and attributed to Meissen in the description. While the dating of the porcelain is similar to that of Meissen towards the end of the 19th century. These plates decorated with romantic scenes definitely do not meet the standards of later 19th century Meissen Porcelain