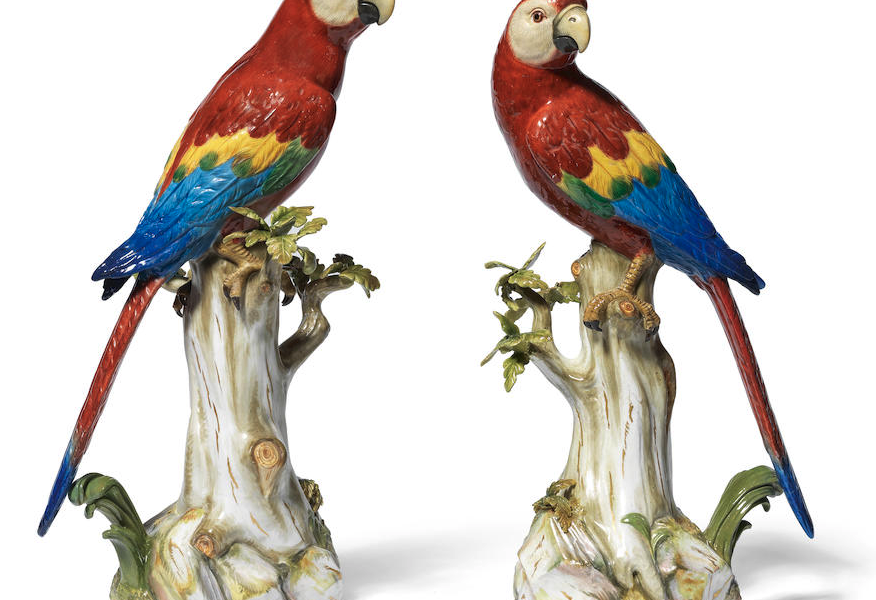 what do this pair of parrots and the pair of figures of  a man and woman have in common?

Few pairs of any item be it Meissen or for that matter other factories can be classified as true pairs unless both models are painted with identical colours. This is the common factor between this pair of parrots and the pair of large figures of a man and woman.  Both the blouse she is wearing and the coat of the man is exactly the same colour pale blue. For any pair to be classified as a true pair this has to be the minimum norm. If a pair of figures are painted in different dating they will be classified as a matched pair. As such their value will be less. Often on a true pair will be seen a letter followed by a number or a number on its own painted in red. This signifies a true pair. However some true pairs the painter neglected to paint his painters number. Perhaps he wanted to remain anonymous?

Looking at the bases of these two large groups the scrollwork design indicated the period in which they would have originally been modelled during the 2nd half of the 18th century. While the gilded design to the bases of both groups is similar what is not the same is the quality. The top group is far better quality than the bottom group. It is also the reason I mentioned in the last post that the more expensive lot is a better investment than the bottom inferior quality group. Whatever the model is in my opinion the sharper the detail is of any ceramic model illustrates far greater workmanship that warrants a higher value. Quality is a factor that I rely on when I make purchasing decisions. The finer the workmanship the more I am prepared to pay. Likewise the best of my stock will command a higher price respectively. However if your budget cannot afford the more detailed pieces then if purchase the lessor pieces that should be a lot lower to purchase.